Last month the whole country was baffled and enthralled by the inquest into the suspicious death of GCHQ ‘spy’ Gareth Williams, who was found inside a padlocked bag at his home in Pimlico, south London.

The case has chilling echoes of a murder that took place more than 150 years ago. Known as ‘The Waterloo Bridge Mystery’ or ‘The Thames Carpet Bag Mystery’, it too featured a male body inside a locked bag.

The bag in question was found on an ‘abutment’ of Waterloo Bridge by two young men in a rowing along the Thames early one morning in October 1857. Once opened, it revealed 23 bones and a few scraps of flesh. The head, hands, feet and internal organs were missing. 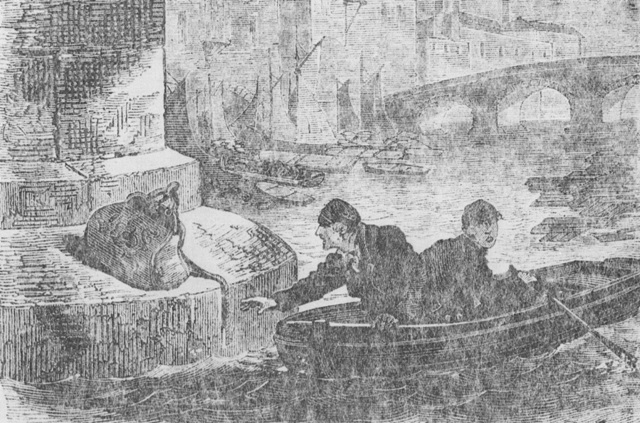 Drawing of The Waterloo Bridge Mystery from the Illustrated Police News

For the next two weeks, as the story played out in the newspapers of the day, the public were both fascinated and appalled by the gruesome details until eventually the police ground to a halt. The only lead was a sighting of an elderly woman carrying the bag on to the bridge the previous night.

Some even suggested that the whole affair was a grisly hoax perpetrated by anatomical students.

The Waterloo Bridge Mystery was ruled a ‘wilful murder’ just over two weeks after the discovery of the body.

By contrast the Gareth Williams case the inquest took place 21 months after the discovery body and ended with the coroner ruling that there was not enough evidence to sustain a finding of ‘unlawful killing’ (the equivalent to the Victorian verdict of ‘wilful murder’).

Both cases became the talk of their day, the subject of gossip and speculation. But there are also many differences. Gareth Williams was an identifiable person. He had a name, a grieving family, friends and colleagues. He had hobbies and interests. Yet somehow the more we found out, the more mysterious his death became.

The victim of the Waterloo Bridge Mystery was never identified. Despite being described by the Times in 1857 as ‘one of the most horrible murders that has ever stained our criminal annals,’ the case is now all but forgotten.

Read the full details of The Waterloo Bridge Mystery